The excavation was undertaken on the site of a new building on the western flank of the Roman road (the modern A4113 High Street) connecting the fortified vicus (civilian settlement) at Leintwardine (Bravonium) with the Roman town of Wroxeter (Viroconium). 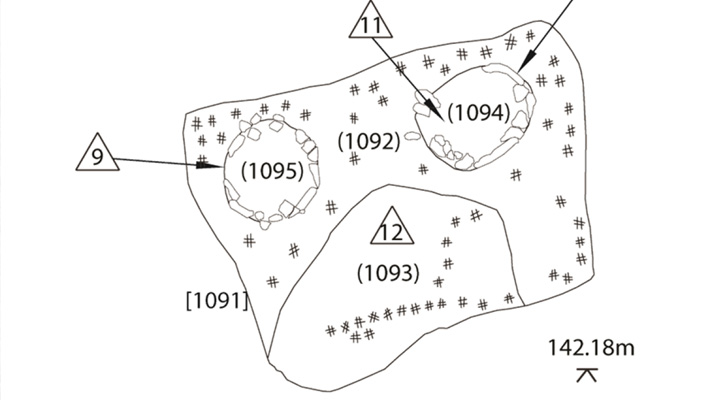 Archaeological field evaluation of the site by Border Archaeology in 2009 revealed a series of cut features close to the line of the road, representing two phases of Romano-British activity separated by a period of abandonment. Fine dark grey ware pottery found in the base of a linear feature [106] dated to the 1st -2nd -century AD whilst a single fragmentary vessel also recovered exhibited evidence of heat exposure and was interpreted as the remains of a cremation vessel. The function of [106] was uncertain but it appeared possibly to reflect the presence of a Romano-British farmstead. Alternatively, it was suggested that, in view of its proximity to the road, its location to the north of the fortified vicus and the presence of potential remains of a cremation burial, the ditch may represent an enclosure demarcating a burial ground. Trenching situated to the west, further upslope and away from the road, failed to produce any evidence of activity predating the post-medieval period (c 1540-1900).

The excavation phase confirmed the presence of at least three phases of Roman activity in the later 1st –mid-2nd century AD. Three cremation burials found at the far south end of the site, in the approximate location of the previous evaluation trenching, strongly suggests the area was part of a larger roadside cemetery adjacent to the present High Street on the line of the important north-south Roman road forming part of Watling Street West between Caerleon an Chester). Alternatively, the cremations may be isolated burials, perhaps associated with a nearby farmstead.

Ditches [1078] parallel to High Street and [1057] running west-east appeared to separate the cremation area from what appeared to be agricultural activities in the northern part of the site containing several substantial ditches running roughly north-south along the roadside and a number of pits. Evidence of crop-processing, woodland disturbance and landscape change was found, with a diversity of charcoal remains recovered from both pits and ditches, many of which were also found to contain exceptionally well-preserved fragments of Roman pottery. Further upslope to the west, the site was largely devoid of features, suggesting a concentration of settlement along the roadside consistent with a pattern of ribbon development (Brown 1996, 559); the paucity of structural evidence implied a fairly low density of settlement, consistent with the semirural character of this area.

The Roman town’s cemetery has eluded previous fieldwork investigations but the cremation burials may represent the northern extent of a larger roadside cemetery associated with either the town or with the fort at Jay Lane. Roman cemeteries tended to occupy roadside sites beyond the main focus of habitation and such a location would thus reflect a pattern found more widely in areas of Roman occupation.

Urn (SF8) contained parts of the skull, spine, pelvis, legs and feet of a 25-40-year-old of indeterminate sex. The relatively small quantity of bone is consistent with a ‘token’ burial typical of the Late Iron Age/Roman period. A lack of tooth roots and very small hand and foot bones may reflect the manner in which the bone was collected for burial.

Radiocarbon dates obtained from the bone placed the burial at the very end of the Iron Age or in the early Roman period while the pottery was consistent with a 1st -or early 2nd -century date. Urns (SF9) and (SF10) contained so little bone that they may be interpreted as ‘cenotaphs’ or memorials. Moreover, it was not possible to determine conclusively whether the remains were actually human. Alternatively, (SF9) may have been a grave offering intended to accompany urn (SF8) rather than containing a burial in its own right.

Cremation pit [1091] also contained much charcoal-rich material and dark brown silt, which may represent bone disturbed from urns (SF8) and (SF9) or pyre debris placed over the urns. Small quantities of cremated bone, charcoal and potential pyre offerings (hobnails, charred plant remains and an animal bone fragment) were recovered from these deposits, which, if not pyre debris, may relate to the same cremation event as the bone deposited in urn (SF8) and so may be part of the same individual, in which case the individual would appear to have been cremated either wearing shoes or with shoes placed on the pyre, as represented by the hobnails, and possibly with accompanying food offerings as attested by the presence of charred plant remains and fragmentary animal bone.

The complete rim and neck fragment of a glass unguent bottle in blue/green glass was also recovered and, whilst a secure date could not be proposed, it would appear to be of the 1st -2nd century; the inclusion of unburnt unguent bottles in funeral rites was not uncommon at this time. The recovery of this piece with a burial perhaps also explains the only identifiable vessel fragment from the excavations of the rest of the site, as that too was an unguent bottle.

That most of the bone was buff/white shows that it had been burnt at a sufficiently high temperature and with enough oxygen available to ensure oxidation. This suggests the community had access to adequate supplies of suitable fuel, probably oak, and the necessary skills and knowledge to construct and tend a pyre successfully. That sufficient fuel was readily available is clearly suggested by the presence in all of the bulk samples and cremation deposits of oak and hazel, which together represent the more useful woodland resources.

The site was abandoned at some point in the mid-2nd century and substantial quantities of pottery dumped in the ditches. The date of this abandonment roughly coincided with that of the auxiliary fort at Buckton and the fortification of the town (Brown 1996, 511-13) and it is possible that, with a military presence no longer in the area, the occupants may have preferred the safety of the town. Following a brief hiatus during which a shallow layer of colluvium was deposited, the area was evidently brought back into agricultural use, resulting in the formation of two further features.

The most significant aspect of these results is that they may demonstrate the adoption of Roman customs by the local population in a comparatively remote location. A transition towards cremation burial occurred in the southeast of England during the Late Iron Age, from the mid-1st century BC, which may have been associated with Roman influence (O’Brien 1999, 9; Hope 1999, 49). Cremation burial became more widespread in England following the Roman invasion of AD 43 with cremation cemeteries located outside towns, usually along major roads. However, some areas of Britain may have practised cremation burial during the Iron Age and so the presence of cremation burial cannot be seen as indicative of the adoption of Roman practices in all areas. Indeed, rural areas may have been particularly slow to adopt new fashions in burial practice (O’Brien 1999, 9).

Cremated remains provided an opportunity to examine burial practices in a rural area, away from the southeast of England, during the Late Iron Age to Romano-British transitional period when cremation burial became more frequent, possibly associated with Roman influence, although native traditions may also have continued in some regions.

Most of the deposits at Leintwardine contained small quantities of bone which was generally too fragmented to identify as definitely human. Two cremation urns (SF9 and SF10) containing no identifiable human bone may have been associated with ‘cenotaphs’ or ‘memorials’, although it is possible that one may have been a grave offering meant to accompany the other rather than containing a burial in its own right.

Another urn (SF8) contained relatively large pieces of bone, with little evidence of fragmentation, and parts of the skull, spine, pelvis, legs and feet could be identified as belonging to an unsexed adult aged 25-40 years at the time of death; however, the quantity of cremated bone (323.7g) was far less than would be expected from a modern cremation and may therefore represent a token burial typical of the period. A lack of tooth roots and very small hand and foot bones may have related to the way the bone was collected prior to burial.

Two deposits (1092 and 1093) contained small quantities of cremated bone thought possibly to have spilled out from urns (SF8) and (SF9) as a result of disturbance but may equally have been traces of pyre debris placed over the urns, as, in addition to the bone, they contained  charcoal and potential pyre offerings, including hobnails, charred plant remains and an animal bone fragment. Fragments of skull and spine from (1092) were identified as the remains of an unsexed adult individual but bone from (1093), although thought likely to be human, could not defintely be idenitifed as such. If this was pyre debris, it is possible that it relates to the same cremation event as the bone deposited in urn (SF8) and so may be part of the same individual, who would then it seems have been cremated either wearing shoes or with shoes placed on the pyre (represented by the hobnails found primarily in (1092) and (1093) but also present in urn (SF8)) and possibly with food offerings, based on the charred plant remains and animal bone fragment. A glass vessel fragment also recovered may have been a grave offering.

The predominantly buff/white colour of the bone shows it was burnt at a high temperature with enough oxygen available for long enough to ensure oxidation, suggesting the community had access to adequate supplies of suitable fuel, probably oak, and the skills and knowledge required to construct and tend a pyre effectively. 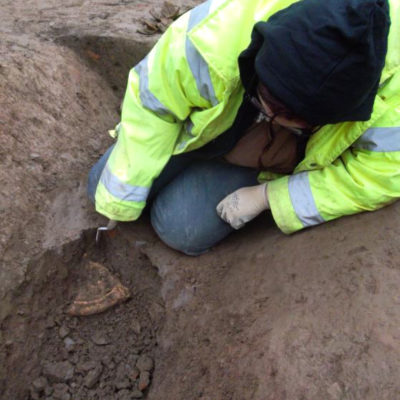 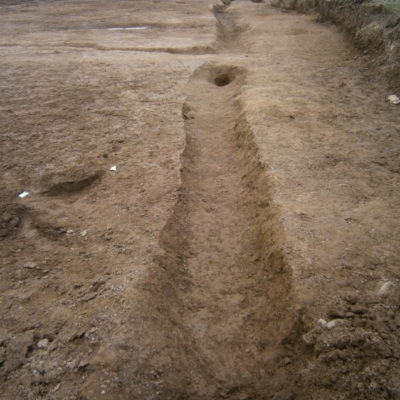 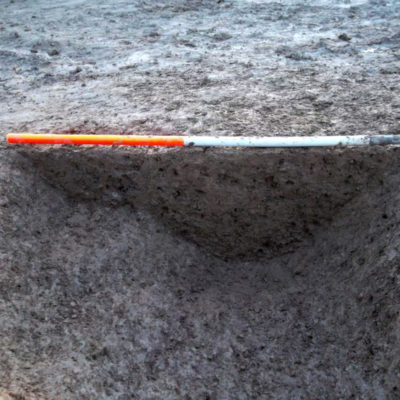 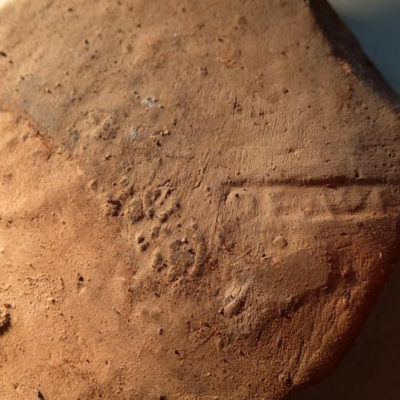