We were instructed by a Car Park Developer to carry out a programme of archaeological work in connection with groundworks for a Multi-Storey Car Park at Lower Kings Road, Berkhamsted, Hertfordshire. 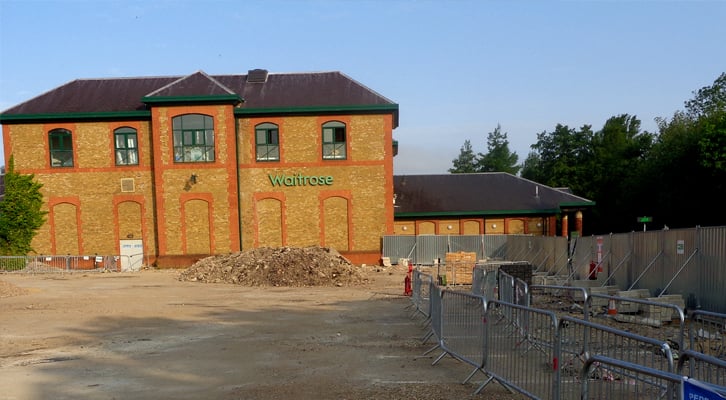 Two evaluation trenches were excavated and an auger transect survey undertaken for deposit modelling purposes and to inform an assessment of alluvial deposition and the potential impact of piling on site hydrology.

Berkhamsted lies within the Dacorum district of W Hertfordshire and is a linear development along the valley of the River Bulbourne, a long-established routeway running NW-SE through the Chilterns.

The site lies at approximately 108m AOD and covers an area of roughly 0.30ha. At the time of the archaeological works it comprised an open-air car park with asphalt surface, lying within the historic core of the town, a designated Area of Archaeological Significance.

The results of the geoarchaeological and palaeonvironmental programmes characterised the complex depositional history of an early, pre-reclamation riverside landscape of shifting creeks and channels supporting a typical range of plant and animal communities. Hydrological change appears to have begun during the late Saxon period, when the presence of watermills interrupted the previously free-flowing river, promoting ‘localised and short-lived, probably episodic’ peat growth and beginning the transition from free-flowing water to boggy marshland.

Reclamation of this boggy riverside area appears to have commenced around the 12th-13th Century, as participation in the wool trade and other key industries brought prosperity to the town. However, throughout the period this area appears to have remained marginal, probably used in part for the dumping of domestic waste and also potentially for iron smelting. A similar pattern of medieval land use was recorded on the Waitrose site to the W (Guttman 1996a, 1996b).

Reclamation activity appears to have intensified during the industrial era, with the opening in 1798 of the Grand Junction Canal partially alleviating the problem of waterlogging, although this remained an environment of ‘dirty ditches and offensive marshes’. The present level of disturbance evident across the site is likely attributable to developments from the late 19th and early 20th Century onwards with the opening of the Bulbourne Factory in 1898 and associated construction activity, with further significant levels of intrusion relating to utility works and subsequent programmes of maintenance and repair.

Geoarchaeological and palaeonvironmental investigation revealed an early riverside landscape of shifting creeks and channels depositing sediment across the floodplain and supporting a typical range of plant and animal communities.

A series of made ground deposits overlying the peat represent efforts to consolidate the site for productive use.

No archaeological features were found in association with the peat and alluvial clays, although 12th -14th Century pottery and animal bone were recovered from the peat deposits, probably representing the dumping of household waste, with 18th Century and later pottery recovered from the made ground deposits.

A significant level of disturbance was encountered that is likely to be attributable to developments from the late 19th and early 20th Century onwards.

Palaeoenvironmental and geoarchaeological results were good and the potential for evidence of iron smelting was noted.