Border Archaeology was instructed by South East Water to undertake a programme of archaeological observation during the course of engineering groundworks relating to the Swinley Forest Strategic Water Main Scheme Swinley Forest Bracknell. 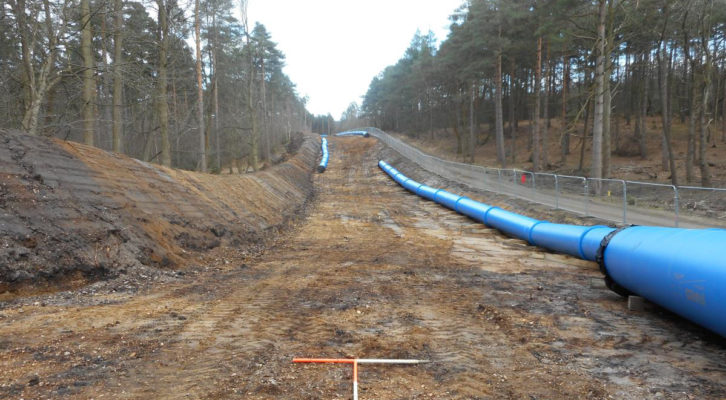 The scheme of works comprised two separate pipeline routes originating at Crowthorne Service Reservoir and covered a total distance of approximately 3.3km. For the purposes of the observation, these two constituent pipeline routes were recorded as Route 1 and Route 2. Route 1 extended southeast to a connection point approximately 90m south of the Wish Stream in Paschal Wood, which forms the unitary authority boundary between Surrey Heath and Bracknell Forest, whilst Route 2 ran northeast to Penny Hill to the southwest of a forest access point from the A322 Bracknell Road.

Topsoil was removed along each route to establish a working easement and a subsequent phase of trenching excavations were carried out for the installation of the new main. The engineering methodology employed to carry out this second phase of groundworks severely restricted identification of archaeological features or deposits and was thus not subject to observation.

The Crowthorne Service Reservoir which form the central point of the site are located to the east of the RomanoBritish settlement of Wickham Bushes, a Scheduled Ancient Monument (SAM 1016330), and the route itself bisected the course of a Roman road known locally as ‘The Devil’s Highway’ and a further possible Roman road that ran between the settlement and The Devil’s Highway.

The area has been used for military exercises since the 18th century and parts of Swinley Forest remain in Ministry of Defence (MoD) ownership. Approximately 700m at the SW end of the pipeline route is owned by the MoD whilst the remainder is Crown Estate. Visible remains of military use in the vicinity of the pipeline include a series of five Napoleonic earthwork redoubts (SAM 1016331) and a cluster of five possible tank traps associated with defensive works undertaken during the Second World War.

Additional evidence of the 20th -century military activity landscape was encountered beneath the topsoil during the course of the groundworks. The well-preserved base of a possible Second World War storage tank or similar structure was recorded immediately southeast of the tank traps and whilst no record of the structure exists, comparison with plans of similar structures recorded elsewhere strongly supports such an interpretation.

No further evidence was recovered during the course of the observations relating to the two Roman roads which are presumed to have been disturbed during the creation of the existing forest landscape.