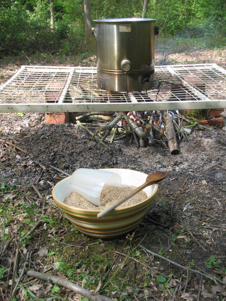 Rebecca has been brewing her own beer during lockdown using traditional methods and this is what she has learnt:

“Without metal, i.e. before the Iron Age, it would have been very hard to make beer, you need the grill and, most of all, the pot to brew the beer. Of course, dead wood doesn’t need to be cut and is very flammable and I am sure prehistoric people used this rather than cutting wood for a fire. But the pot would still be a problem.

I think from earliest times it would have been a specialist practice – in the medieval period women brewed the beer. Of course, by then they would have been skilled at all the processes, and boiling the wort for an hour (as the recipe says you do) means all dangerous pathogens in water would be killed. The end produce is really nice and not that alcoholic. It is sort of lemony and refreshing, something you could quite easily have at breakfast (which medieval people did drink) and all through the day.

I’m not sure how this brew will turn out. Hoping the yeast takes and is working…I will know in about three days.”

Rebecca reported back on the brew:

“Well I fear the drinkability of the beer is not good this time round.  However, I do know why.  What happens when you add the liquid to the malt – which I made myself sprouting the grains, roasting and grinding them – is the malt absorbs all the water. So, in order to have a brew you ‘sparge’, i.e. wash boiling water through to bring it back to a reasonable amount.

I did this, but I think too much, so there is little sugar in the brew (strictly called wort), I should have chucked some sugar in at this point, for the yeast to work on, but I wanted to keep to a medieval method.  The result is a very nice drink, light, lemony, thirst quenching, but not alcoholic. Probably about 1%.  You do need the alcohol to give ‘body’ to the taste I find.  So, this is my third attempt, strangely the first attempt last year was the best. But I know what I did wrong, so, next time …”