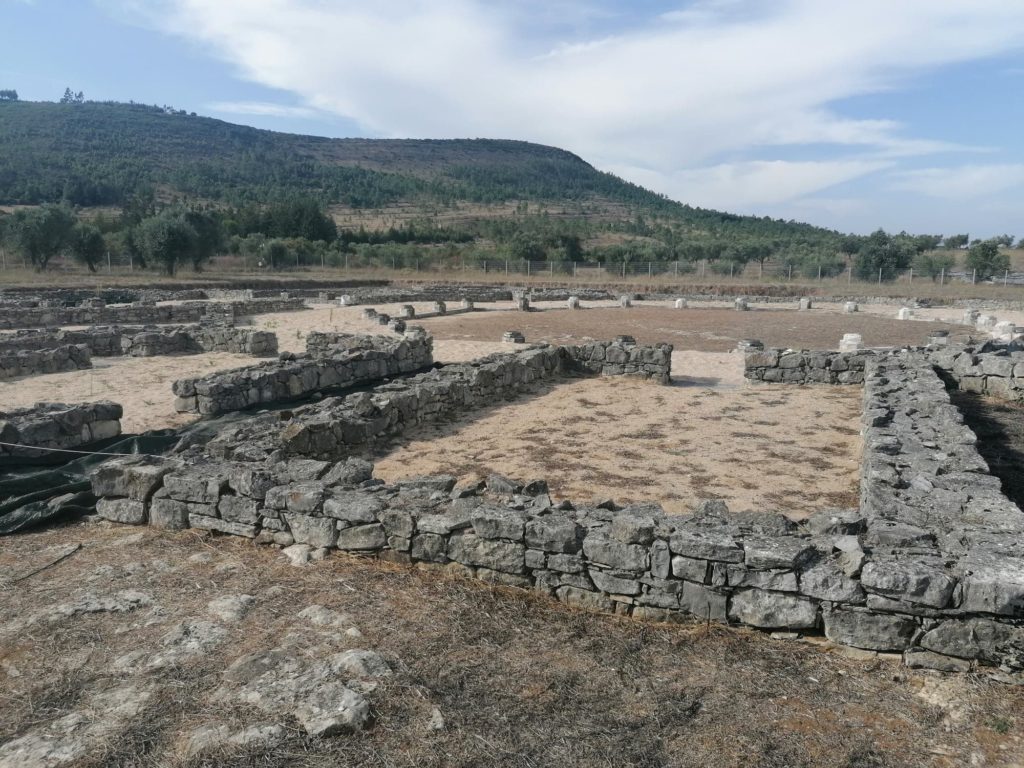 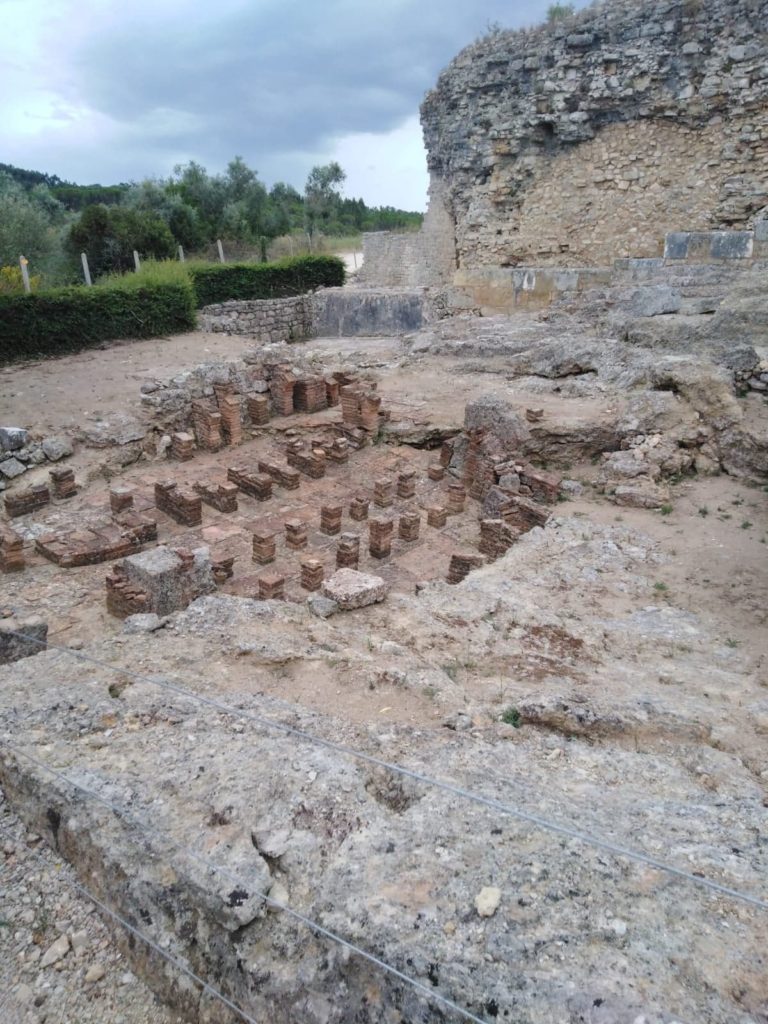 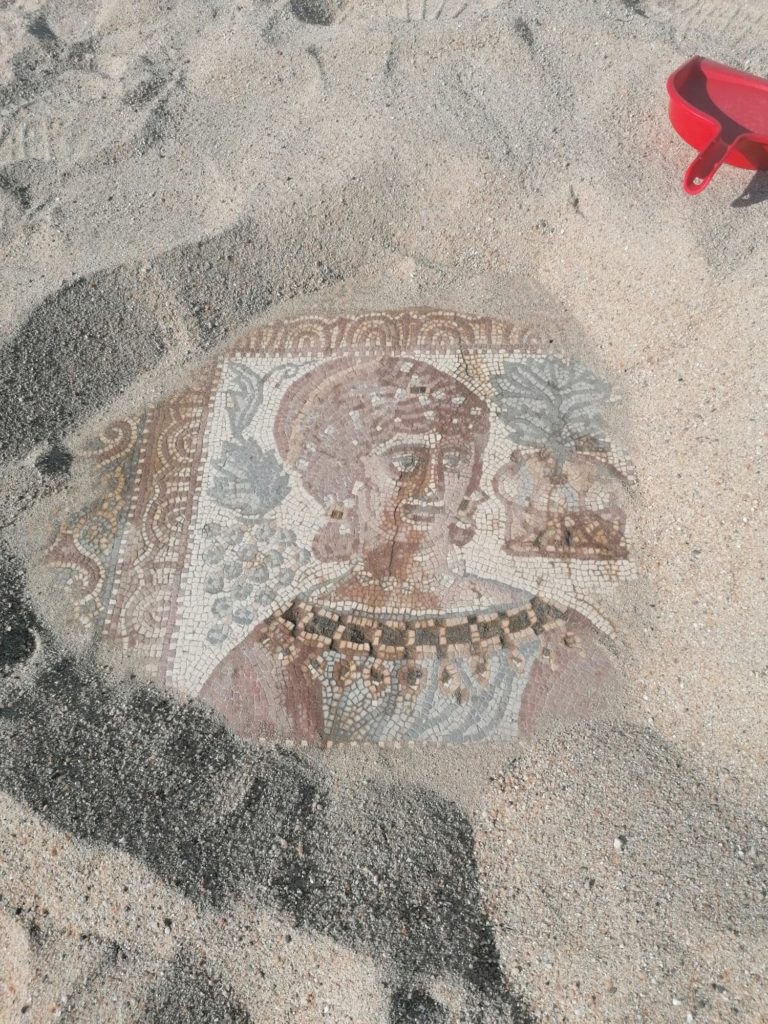 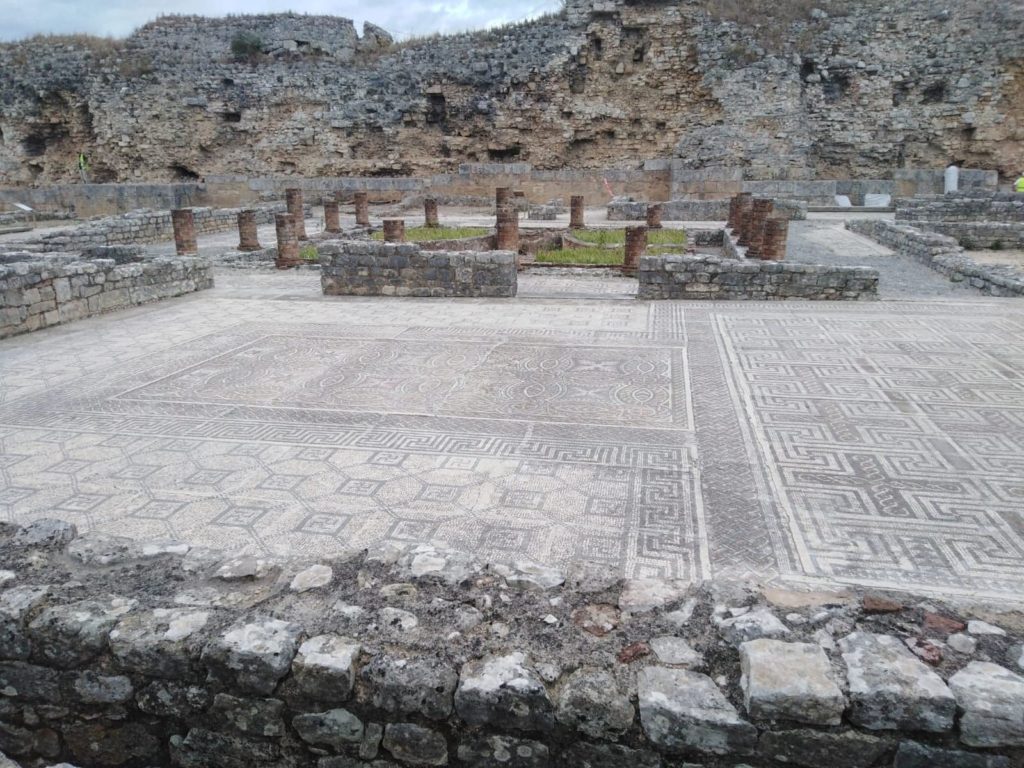 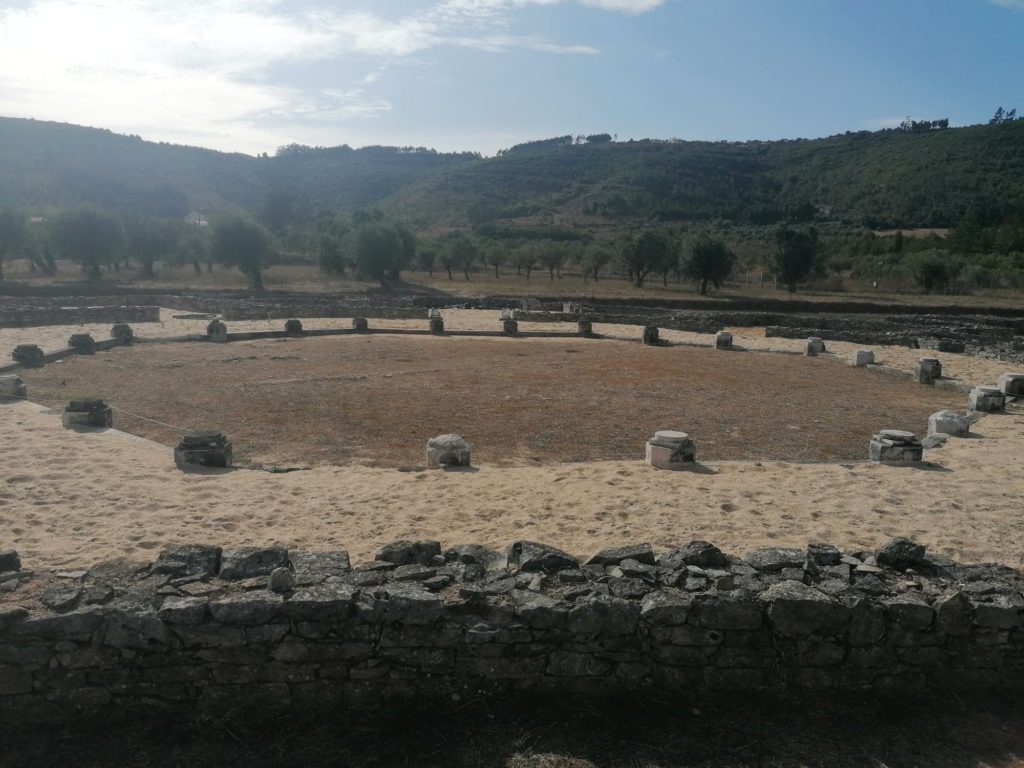 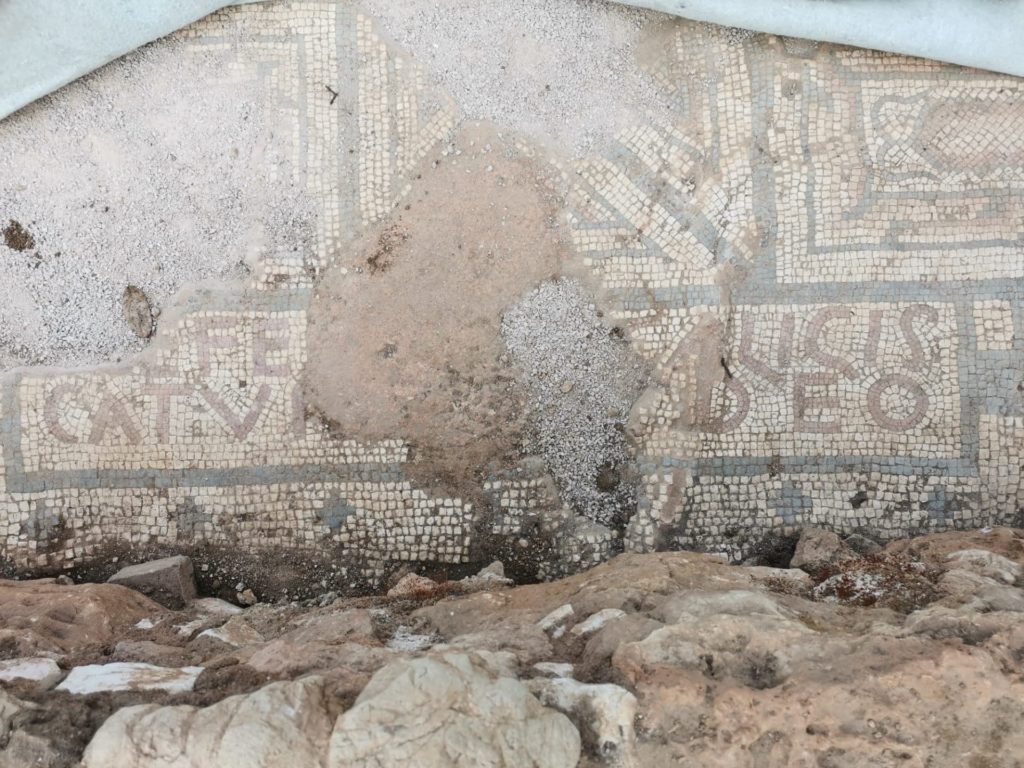 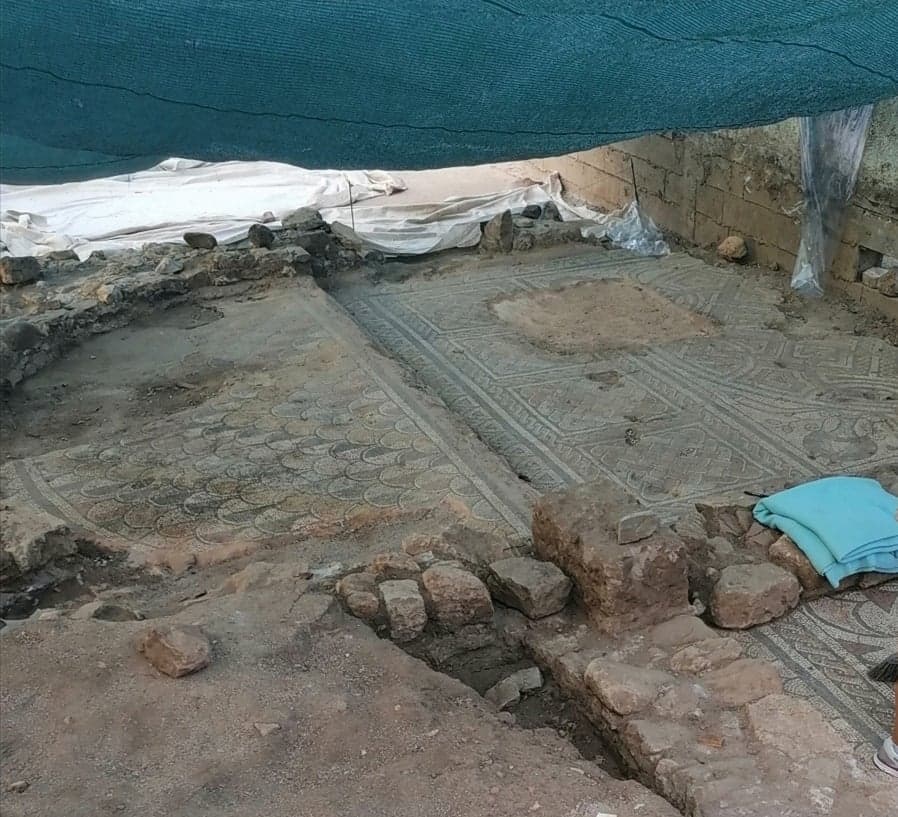 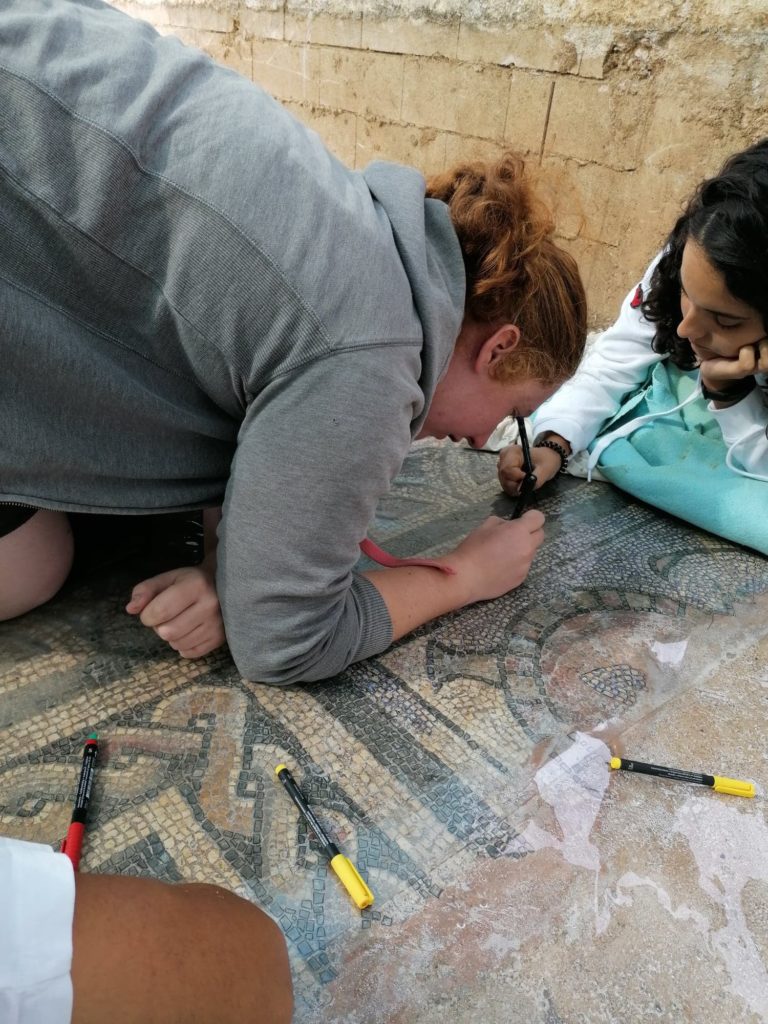 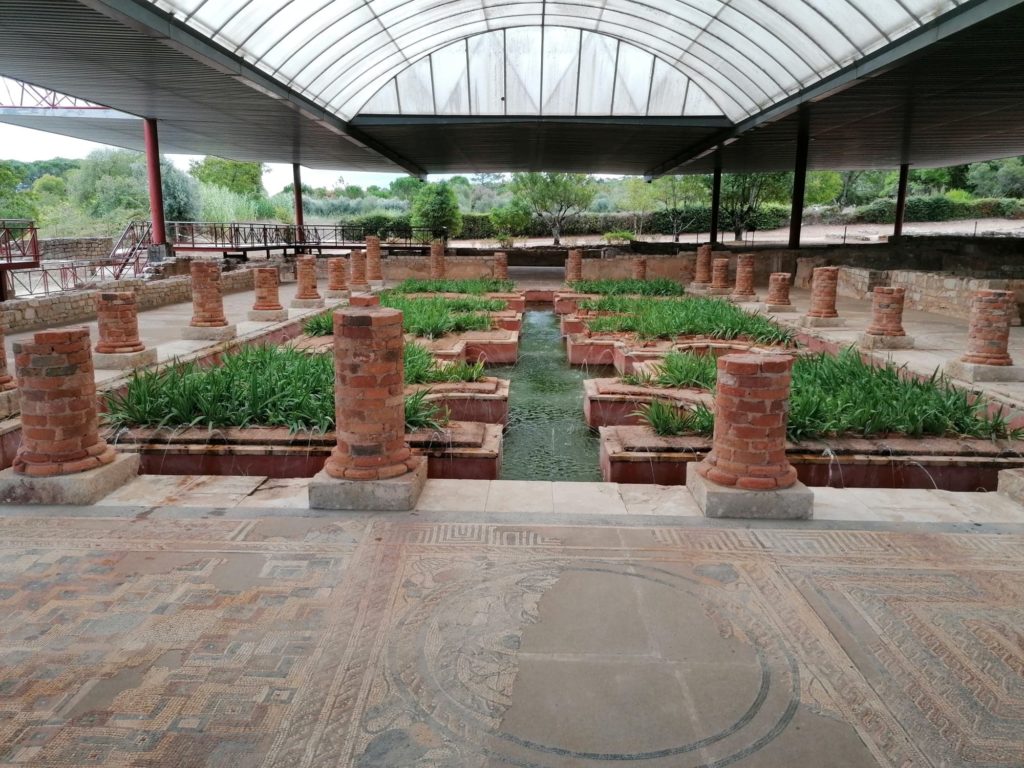 Our two colleagues Chloe and Kirsty took some time off this late summer and this is their story. After two weeks of quarantine upon their return, they’re now back safely in MK.

On the 7th of September, the two of us took part in an excavation for 2 weeks in Portugal. The excavation is located in the small Parish São Simão, situated in the municipal Penela in the District of Coimbra. This is the 5th year of excavation and when we arrived this year’s dig had already been going on for a couple months.

The archaeology was incredibly well preserved. The foundations of a 4th Century Roman AD Villa was exposed, revealing floors of mosaics that displayed different patterns and colours which differed in each room. Also visible was a sump in the middle of the building where a water feature was located within the villa, simply for display reasons. A further significant highlight of the villa was a mosaic that exhibited Latin writing:

This emphasises the possibility that a Roman warrior was living in this villa, hence the dedication to the God of War, Mars. The mosaic also states that whoever enters the room can take their boots off and enjoy the smooth flooring of the mosaic, without worry it will hurt their feet.

What is also interesting about this written mosaic is that it was deliberately tarnished, specifically the words that would have mentioned the War God. This is where the next phase of the excavation becomes evident. The Villa was later invaded by the Visigoths during the migration period at the end of the Roman period. With new politics and new ideology overthrowing a weakened and unstable empire in Portugal, any mention of previous beliefs, such as the mention of the God of War, were destroyed. In this villa, the Visigoths proceeded to restructure the building by constructing walls on top of the mosaics. The building was eventually abandoned and most likely not reoccupied until the medieval period.

The Franciscan Order had great influence in Portugal during the 13th century. The Order were Catholic Church missionaries and it is evident that they came to use this villa in Penela and its location as a burial site. Many skeletons have been excavated during the course of the excavation over the 5 years, and there are more to be uncovered in future summers as the excavation expands.

Our role on this excavation to help clean the mosaics to reveal them in their best condition, and draw them for the recording process. First, we washed the mosaics and using small scalpel tools, and removed any dirt that covered the tesserae. It was important that the full extent each tessera was revealed.

Once this was done, the rest of the time was spent drawing the mosaics to a scale of 1:1. This meant covering the mosaics in 3m length plastic sheets, similar to laminate or acetate, and tracing each individual tessera with a marker pen. Different coloured pens were used for the varying colours within the mosaics. Some mosaics were more complex than others, with some designs being simple squares of alternating colours, to other patterns of geometric shapes and weaving patterns. This demonstrates the changing designs and tastes of romans over time.

Once all the mosaics have been drawn, they will be scanned and traced digitally in order to create a digitised accurate drawing of the mosaics of this site for the record.

The site was run by the project leader Sónia, and her anthropologist Flavio. Both were lovely and gave us a great experience working on a dig in a foreign Country and teaching us about the local archaeology. Everyone else who worked on the site were volunteers, mainly young teenagers just entering the world of archaeology. A bonus was the site dog Nala who quite happily sat on the mosaics, inspecting everyone was doing their jobs!

One afternoon, after work, we visited the museum to which our accommodation was attached as this held the artifacts and remains recovered from a similar Roman villa in Rabaçal, located only a few kilometres away from the São Simão villa we helped record. These finds of marble, metal and pottery were still being examined by students who also helped clean and trace the mosaic.

The 4th century AD Rabaçal Villa was located in a large open field, next to the Roman road connecting lisipo to Bracra Augusta. The villa had several different areas of occupation; the owner’s residential area, balneum (bathing area), courtyard and possible chapel, as well as, servant’s quarters with their accommodation, warehouses and workshops. The remains of a large watchtower can be seen close to the entrance of the villa suggesting this area could have been under attack throughout its use.

We visited the main occupation area of the villa complex. Within this area there was a large entrance way leading into an inner courtyard, with intricate mosaics running along all eight corridors surrounding this open space.  These mosaics ranged from geometric patterns to detailed images of animals, vegetation and agriculture, very similar to those uncovered at São Simão. The most impressive of theses being the large mosaic of four people signifying the four seasons surrounding an unknown central image. The spring and autumn images were the best preserved, the others being barely visible. The photo attached is the women representing Autumn.

At the other end of the accommodation, a possible chapel was visible. No finds were recovered from this area; however, the shape indicates it was a chapel. It was very impressive to see such a large, well preserved villa so close to one we were working on.

On the afternoon of our last working day we were also given a tour of the Ruins of Conimbriga by Inêz, a very knowledgeable student who worked beside us at São Simão. She stated that the large area of Conimbriga that was currently visible was only approximately 10% of the possible area of Roman occupation that was there. The excavations of this city began in the late 1920’s and show a very large, complex city scape including a forum, aqueduct, shopping area, industrial buildings, houses, bathing areas and amphitheatre all surrounded by a large defensive wall.

The most impressive area of these ruins is the manor house ‘A Casa dos Repuxos’ with its intricate, impressive mosaics of mythological beings, geometric patterns, and everyday life preserved outstandingly in situ. Within this garden the central area also has a water feature with the original fountains still in place. This archaeological site shows the life of Portuguese Roman city dwellers during this period of time as opposed to those living in the São Simão and Rabaçal Villas.