We were instructed to carry out a programme of archaeological work comprising geophysical survey, archaeological field evaluation and excavation at Dymock, Gloucestershire. 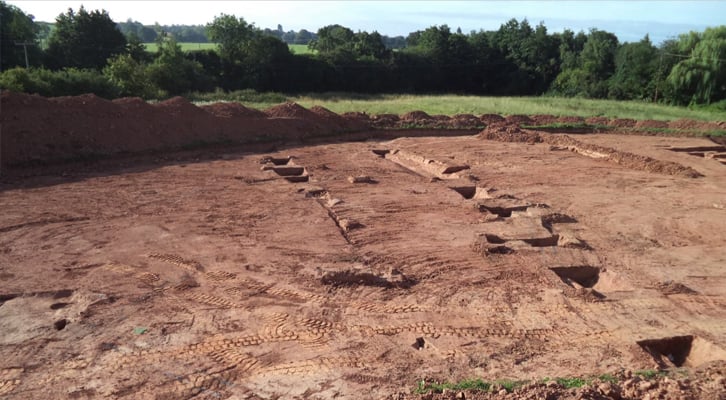 The excavation programme was undertaken and followed directly upon completion of initial geophysical survey and archaeological evaluation. The evaluation identified a number of ditches crossing the site, together with possible pits and postholes sealed by a post-Roman plough-soil. Excavation confirmed these initial results and identified in addition evidence of small-scale industrial activity, which developed during the 1st -early 2nd century AD and declined in the later 2nd century, reflecting a pattern of activity identified elsewhere in Dymock, Gloucestershire.

Little pottery was found dating to the 3rd century or later and this may have been a time when the focus of the settlement moved north and west. Initial results suggested the most significant feature on the site was a ‘pit’ feature dated to the late 1st -early 2nd centuries.

A substantial amount of pottery and burnt clay was recovered, suggesting this may have been a small surface-built kiln, although the results were not conclusive. It was concluded that the pottery was likely to have been locally made and that it may indeed be the remnant of a small surface- built kiln, although the fill was not a ‘last firing’ but detritus from kilns nearby, located outside of the excavation area.

Further evidence of small-scale industrial activity was represented by hearth features of unknown function, one of which contained a fragment of a mould. Whilst substantial amounts of iron slag were found on the site, this could not be related directly to evidence for iron-smelting. Similarly, the very small amounts of hammer-scale found in samples from two postholes was insufficient to confirm that smithing was being undertaken on the site. It is possible that both the slag and the hammer-scale derived from the known metalworking activity previously identified at Kyrleside, which adjoins the site to the north.

Two substantial ditches ran from north to south across the site and whilst it seems likely that these were field boundaries, they almost certainly also served a drainage function, particularly in view of subsequent efforts to drain the field during the post-medieval period. While their alignment suggested that these features were open at the same time, the pottery indicated that they may have gone out of use at different periods. A far greater number of finds were recovered from the northern end of the ditches than from their southern ends, further suggesting that the site may have been peripheral to the activity taking place to the north, possibly closer to the line of the Roman Archaeological Excavation road, with the ditches utilised for the convenient disposal of domestic and other waste once their primary function had ceased.

A large enclosure on the western side of the site may have been unrelated to the ditches; it contained very few finds and the ditch defining it appeared to have been backfilled shortly after excavation. No features were associated with it and it is thought possible that the pottery in its fills may have been residual.

The Roman features had been truncated during the formation of a post-Roman plough-soil, which sealed these features and which contained large quantities of Roman pottery.

During more recent times, the site had been deliberately levelled, with the truncation of the post-Roman plough- soil on the northern part of the site and deposition of rubble to raise the surface in the waterlogged area to the east, adjacent to the ditch.

The excavation confirmed the results of the evaluation, indicating the presence of an area on the periphery of the Roman town, used for a brief period in the 1st century AD. The decline of Dymock as a manufacturing town in the 2nd century would have first affected the marginal areas, explaining the short period of activity on the site. The discovery of the remains of a possible surface-built kiln, may support earlier suppositions that pottery was made in the vicinity. Whilst no in-situ pottery was found within this feature, it seems likely that the 1st to early 2nd century reduced, oxidised and calcareous wares could have been made on-site. The pottery produced on the site would have served a local market, the decline of which would have reduced demand for the kiln products. That occupation continued nearby is shown by the use of the N end of ditch for the dumping of rubbish well into the 3rd century and also that this feature remained open, probably used as a field boundary.