Archaeological works were carried out for a multi-storey car park development in Berkhamstead. 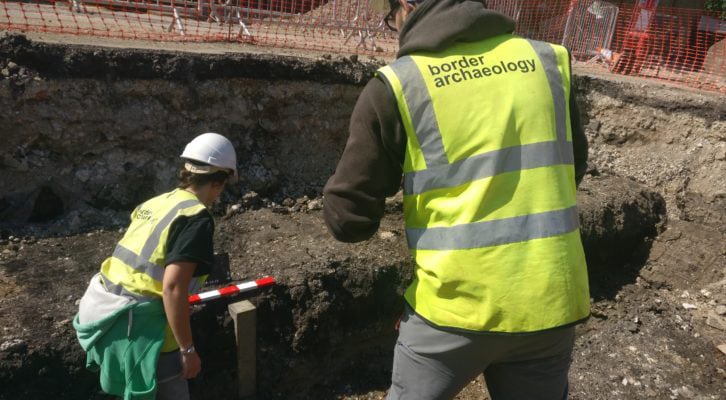 Our Report detailed the results of archaeological work carried out in connection with construction groundworks for a Multi-Storey Car Park Developer.

The site lies within the historic town centre of Berkhamstead in the valley of the River Bulbourne, its riverside location offering considerable potential for the survival of peat and alluvial deposits and for the recovery of preserved organic remains such as wood and leather, together with palaeoenvironmental material for the reconstruction of early environments. It was recognised that development may affect groundwater levels and thus alter the burial conditions of any archaeological remains.

The aim of the work was to:

No archaeological features were found in association with the peat and alluvial clays, although 12th -14th Century pottery and animal bone were recovered from the peat deposits, probably representing the dumping of household waste, with 18th Century and later pottery recovered from made ground deposits.

A significant level of disturbance was encountered that is likely to be attributable to developments from the late 19th and early 20th Century onwards connected with the construction of the Bulbourne (Clothing) Factory in 1898, with later significant levels of intrusion relating to utility installation, maintenance and repair.

Located within the historic urban settlement of Berkhamstead on former marshland between Roman Akeman Street and the River Bulbourne, the site had been reclaimed during the medieval period, as confirmed by geoarchaeological augering. This found evidence of an earlier floodplain environment of shifting streams and channels beneath 2m of made ground, with trial-trenching and groundworks observations confirming the absence of any surviving archaeology.