Planning Application for conversion of the property into first and second floor residential apartments.

As part of our Heritage Assessment, we assessed the impact of the proposed conversion works on the listed building, internally & externally, as well as the impact on nearby built heritage assets and the Ashford Town Centre Conservation Area. 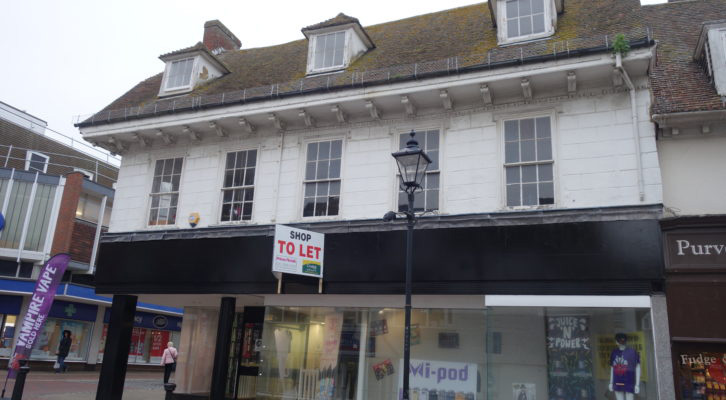 We undertook a Heritage Assessment to examine the impact of the proposed conversion of commercial premises at High Street/North Street, Ashford, Kent into residential apartments (on the first and second floors) on nearby designated and undesignated heritage assets including the Ashford Town Centre Conservation Area. Further information was subsequently provided in the form of a programme of building recording of the interior of the building (to HE Level 2).

The results of this Assessment can be briefly summarised thus:

The scheme proposals for High Street (a Grade II listed building of late 17th /early 18th century date) and North Street (an unlisted building constructed in the early 20th century) are considered in the main, to be wholly beneficial to the buildings on site. Currently they are in a poor state of repair both externally and internally and would greatly benefit from much needed repair and maintenance work.

With regards to the exterior proposals, it is considered that, based on the available information, that they would be considered to have a Neutral/Slight impact, indeed positively enhancing what may be regarded as a prominent corner building within the Ashford Conservation Area.

The interior proposals are on a more significant scale and as such, have been assessed as having a Slight to Moderate impact on the overall significance of the listed building and adjoining property at North Street. While the internal alterations to the first and second floors are extensive, with the insertion of new partitions, fixtures and fittings, which will obscure evidence of former internal arrangements, surviving historic architectural features (such as beams, floorboards, cornices and staircases) will be largely retained throughout. It is also considered that the internal alterations will have a Positive effect in many aspects, in terms of enhancing and refurbishing a building which, in certain aspects, is in a poor state of repair.

Conclusions: Overall, it is considered that the proposed alterations will have a beneficial effect on the buildings in question and will not detract from the historic character and significance of the Ashford Conservation Area or nearby built heritage assets.

However, if the interior of the listed building is likely to be compromised or historic fabric removed, a programme of historic building recording, in this instance to Historic England Level 2, is recommended prior to commencement of works.

We undertook a further programme of building recording to provide additional information to assess the impact of the alterations on the interior. Subsequently, Planning Application was approved and Listed Building Consent granted.